Last weekend was spent at one of the world’s biggest open source conferences, FOSDEM. You can check out last year’s review to get an idea of the scale of the event. Since there’s no registration process, it’s difficult to estimate how many people attend but given how many rooms there are, and how full they are, it’s easily several thousand. I was impressed last year at how smoothly things went and the same was true this year.

The main reason to attend this time was to run a demo of MirageOS from an ARM board — one of the main advances since the previous conference. I looked over all the things we’d achieved since last year and put together a demo that showcases some of the capabilities as well as being fun.

2048 from a Unikernel on an ARM board

The demo was to serve the 2048 game from a Unikernel running on a Cubieboard2 with its own access point. When people join the wifi network, they get served a static page and can begin playing the game immediately.

The components I needed for the demo were:

The first two pieces should be straightforward and indeed, I had a working unikernel serving the 2048 game within minutes (unix version on my laptop). The additional factors around the ARM deployment is where things were a little more involved. Although this was technically straightforward to set up, it still took a while to get all the pieces together. A more detailed description of the steps is in my fosdemo repository and in essence, it revolves around configuring the wifi access point and setting up a bridge (thanks to Mindy, Magnus and David for getting this working).

Once this was all up and running, it was a simple matter to configure the board to boot the unikernel on startup, so that no manual intervention would be required to set things up at the booth.

I gave the demo at the Xen booth and it went very well. There was a small crowd throughout my time at the booth I’m convinced that the draw of a board with glowing LEDs should not be underestimated. Many people we’re happy to connect to the access point and download the game to their browser but there were two main things I learnt.

Firstly, demos involving games will work if people actually know the game. This is obvious, but I’d assumed that most people had already played 2048 — especially the crowd I’d expect to meet at FOSDEM. It turned out that around a third of people had no idea what to do when the game loaded onto their browser. They stared blankly at it and then blankly at me. Of course, it was trivial to get them started and they were soon absorbed by it — but it still felt like some of the ‘cool-factor’ had been lost.

The second thing was that I tried to explain too much to people in much too short a time. This particular demo involved Xen unikernels, js_of_ocaml and a Cubieboard2 with a wifi access point. There’s a surprisingly large amount of technology there, which is difficult explain to a complete newcomer within one or two minutes. When it was obvious someone hadn’t heard of unikernels, I focused on the approach of library operating systems and the benefits that Mirage brings. If a visitor was already familiar with the concept of unikernels, I could describe the rest of the demo in more detail.

Everything else did go well and next time I’d like to have a demo like this running with Jitsu. That way, I could configure it so that a unikernel would spin up, serve the static page and then spin down again. If we can figure out the timing, then providing stats in the page about the lifetime of that unikernel would also be great, but that’s for another time. 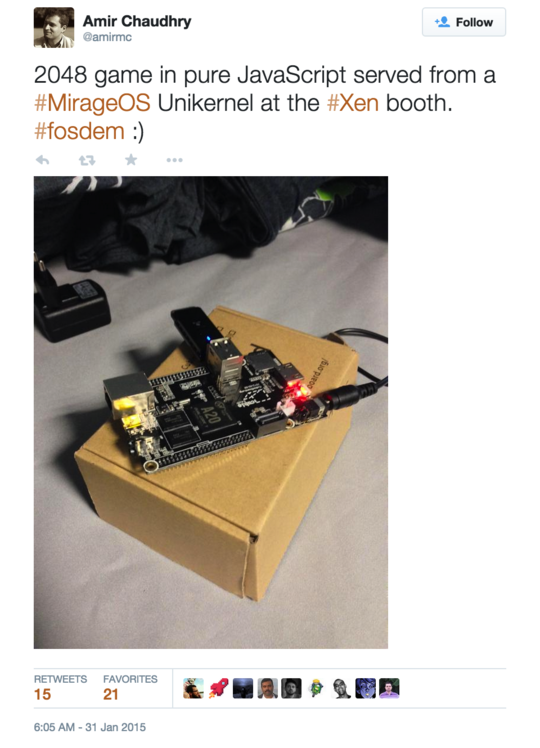 Sidenote: The beginnings of a ‘personal cloud’

One of the things we’re keen to work towards is the idea of personal clouds. It’s not a stretch to imagine that a Cubieboard2, running the appropriate software, could act as one particular node in a network of your own devices. In this instance it’s just hosting a fun and simple game but more complex applications are also possible.

Huge range of sessions and talks

Of course, there was lots more going on than just my demo and I had a great time attending the talks. Some in particular that stood out to me were those in the open source design room, which was a new addition this year. It was great to learn that there are design people out there who would like to contribute to open source (get in touch, if that’s you!). I also had a chance to meet (and thank!) Mike McQuaid in his Homebrew talk. FOSDEM is one of those great events where you can meet in person all those folks you’ve only interacted with online.

Overall, it was a great trip and I thoroughly recommend it if you’ve never been before!