I was at an event run by Cambridge Wireless today on the Internet of Things. These are my notes. Although I’ve named people, I’m paraphrasing a lot so best not to treat anything you read here as a direct quote.

There were a few audience polls conducted using little keypads they handed out. There were only 30-ish keypads so it’s not necessarily indicative of how the whole room felt. I took some hasty pics of a few of the slides (mainly the poll results) so apologies for the poor quality.

“The Enterprise and the Internet of Things - Evolution or Revolution?”

Nowadays, you can walk into the C-suite and start a discussion about the IoT. They may not know what they’re talking about but someone’s told them they need to be thinking about it. But what is IoT?

One of the problems in industry you go to your Director and you explain this new tech and all the awesome things you can do with it and he asks the dreaded question, “So what?” Example of the Connected Toothbrush. With a connected toothbrush you can automatically have a remote relationship with your dentist. But he already drives a BMW and it’s not clear how he benefits from that. He wants you in the office where, every time you open your mouth, he sees new business development opportunities. For the moment, he neither needs nor wants a remote relationship with you. Leads to the question about who’s going to sign up for the business case.

Number of key areas that need to be addressed (paraphrased):

Overall, IoT is an enabler for a number of wider trends. IoT can improve operational efficiency and enhance customer experience. Normally these are in conflict with each-other. However, if we just get into a tech-fest, then we might just end up with a large number of failures as we’ve seen with ‘Big Data’

Poll - Which (categories of) business-related infrastructure categories are most urgently needed for building the Internet of Things. 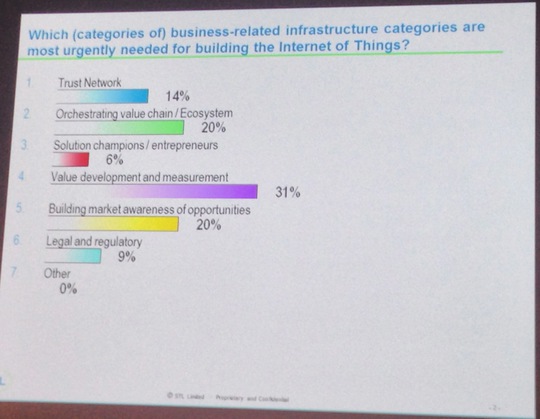 Electric Imp aims to help people in Product Development in the IoT space, namely with the connectivity problem. The name ‘IMP’ came from ‘Internet Messaging Processor’. Name is also from Terry Pratchett who’s stories had devices that contained an imp which did the work :)

Building connected devices is difficult. Have to be secure, easy to set up. There are many choices for connectivity, problems with managing the code on the devices. Electric Imp picked wifi and decided to do it well. This satisfies a lot of markets but not all.

Side story of the hacked fridge sending spam emails.

Things run through Electric Imp system and they manage the security. It’s security as a service. Electric Imp manages deployment of your code too so developers can just push code and it will end up on all their devices.

Simplicity comes from one-step setup. It’s optical and uses a smartphone and flashes the screen, which sends the wifi SSID and credentials to the device (via a sensor). Customer code runs within a VM on top of with custom OS (impOS) taking care of I/O (TLS-encrypted wifi connection to service).

Difficult to debug devices in the field so cloud based- service helps with that. They do embedded stuff on the device and cloud stuff in the cloud. There’s another VM in the cloud that’s paired with the VM on the device. Heavy lifting can happens elsewhere so no need to parse JSON on the device itself.

Q - How do you deal with identity of units?
A - Imps have unique serials and the devices they’re plugged into are also unique (missed how).

Plextek was working in this field when it was called ‘telemetry’. One of the earliest things they worked on was ‘Lojack’ (car tracking). Things then shifted to ‘smart cities’ and now people talk about ‘IoT’ and want consumer devices with consumer volumes.

2014 has got to be year of IoT. However, still some way from business cases as it’s too expensive to simply track your cat (approx £100 set up fee and then around £30 pcm).

Deployment often costs more than then the sensor devices. c.f street lighting systems. Choice of radio system is critical. Projects in UK/Europe are about incremental cost savings with pay-back in less than 5yrs. In industrialising countries, there is new build which is easier then retrofit. Urbanisation creates strain and demand. Local issues relate to the Spectrum issues and local regulations (e.g mandate to use govt encryption streams). Data privacy is also concern as we don’t know who holds the monkey. That’s made even more difficult when you go abroad. Local politics also matters.

Georg is in Consumer branch for Europe. Huawei wants to be top M2M module vendor in the coming years. They’re operator and system integrator agnostic.

Challenges for mass rollout are a scattered market requiring complex solutions. Alignment of all parties in one adequate business model is quite tricky, esp when it comes to customer ownership. Should consider the value chain.

Amount of data generated is also going to be huge. Smart meters in German households could send over 4TB per day, which is a huge strain for mobile networks.

LTE advantage for M2M is obviously bandwidth but that’s only relevant to a few verticals (signage, routers, and in-car entertainment). Low latency is more important for industrial alarms and medical devices. 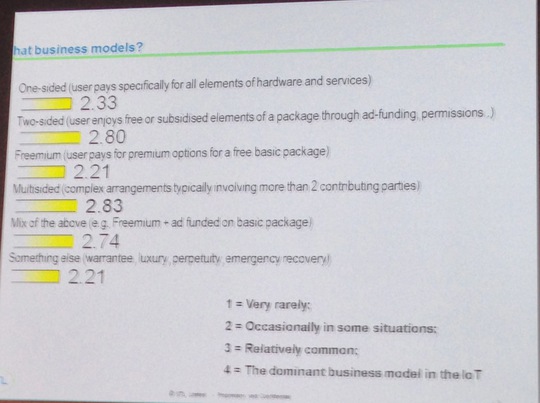 Break down of poll results. 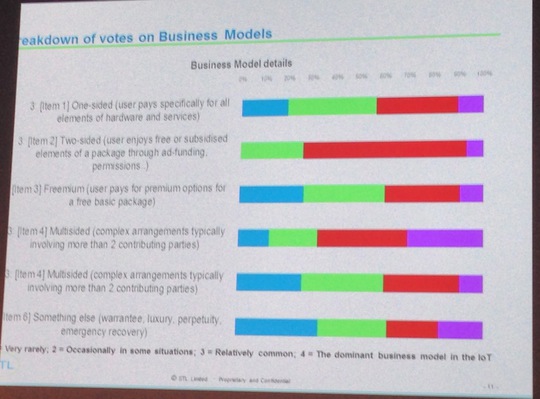 Barco does a lot of visualising information. Displays for radiographers, stuff in cinema screens, screens in flight simulators and a lot more.

Need to take in data from sensors, display relevant information and allow operators to make SMART decisions. e.g number of CCTV cameras in London - who’s looking at them? Real ‘Big Data’ step is at the operator level.

Important to use standards, rather than proprietary systems.

Q - In transport visualisation do you have low enough latency to get real-time info?
A- Yes, e.g on a route in Brazil near Sao Palo it’s closed dues to fog. Real-time info important for understanding the whole route.

Purvi on the Regulatory environment
No tailor made regulation v high regulatory focus. Regulatory focus from leading bodies and many of them said that existing regulation can be amended to facilitate M2M/IoT. Made more complicated by lack of globally agreed definition of IoT (which make it difficult for lawyers). There’s generally promotion of Open Standards. EU does believe that this is v important. People should read the RAND report (Nov 2013), commissioned by the EU to examine if there should be standards.

Justin on IP issues
With any standardisation process, you’re hoping to increase adoption with the trade-off of Right of IPR owners. FRAND (fair, reasonable, and non-discriminatory terms) are also important but that’s also debatable. When considering how to protect IPR, it’s worth comparing whole-system claims with protecting at different layers of the tech/value stack and build a portfolio.

“The impact of autonomous systems on surface transport”

TRL is the Transport Research Laboratory. Did some work to consider the impact of autonomous transport on the overall value chain. Some of things we’re trying now with autonomous driving have been successfully done in the past by other means (e.g car tracking a lane with magnets). 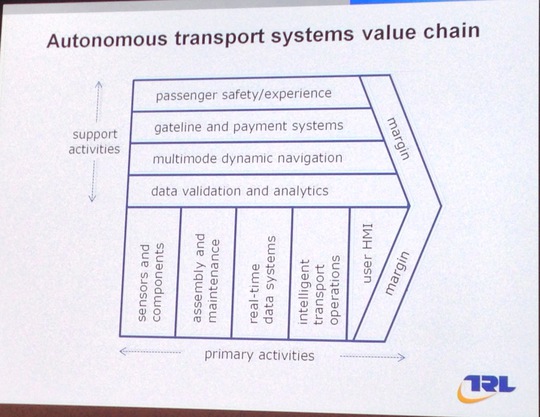 What is IoT? Humans don’t scale. Population is predicted to tail off at around 9Bn. Connected devices are growing and the rate of change is exponential (and increasing). In the 90s we used to be our own sysadmin with maybe one device. Now we have several and some cloud services. In the future there will be many more and they’ll have to manage themselves. There are different problem you face as you go from 1 to 10 to 100 to 10000 to 1MM+ deployed devices. Issues ranging from device updates al the way to regulation and externalities that affect your business.

In 10 years time, when all is said and done, we won’t be calling it the Internet of Things. It’ll just be called the Internet.

Q from an application developers perspective wht would you different earlier in your development if you were to go back and start again
A - AlertMe started a bit too early so there were a lot things were not off-the-shelf. Had to build. Right now can see a lot people reinventing the wheel but shouldn’t need to do this.

“A new standard to connect the Internet of Everything”

One of the things TTP works on are wireless standards.

The size of the grey blobs are in an indication of market size. 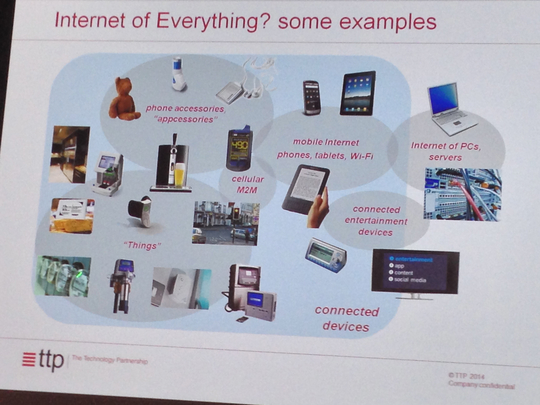 Users will expect things to cost pretty much the same as they did before. Cost will be critical and as we buy things we generally still expect them to last for years.

TTP Matrix is a proprietary standard specifically for use by low-cost wireless connected devices. It’s optimised for efficient use of radio spectrum, long range, low cost and power efficient. Use-case example (DisplayData) are the pricing labels on supermarket. 50k products running through only 3 gateways (other standards would find this difficult). Low power consumption means a battery can last 10 years.

Poll - Which (categories of) technical / architecture building blocks are most urgently needed for building the Internet of Things. 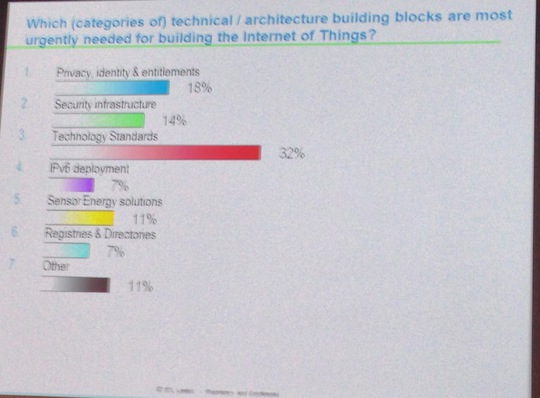 Interesting discussion of Humans role in IoT. For home consumer devices people may not want to have to make any decisions (completely automated) but corporates my want all information in order to integrate and decide.

How quickly will this happen? It’s difficult to say when you’re in the middle of it. We’ll know it’s happened after the event. It takes about a decade for things to get things in to mature in the market. On the other hand, it’s happening.

Poll - Big and small data - Which statement do you agree with most/least
I only got a pic of the latter but it’s the inverse of the former (unsurprisingly). 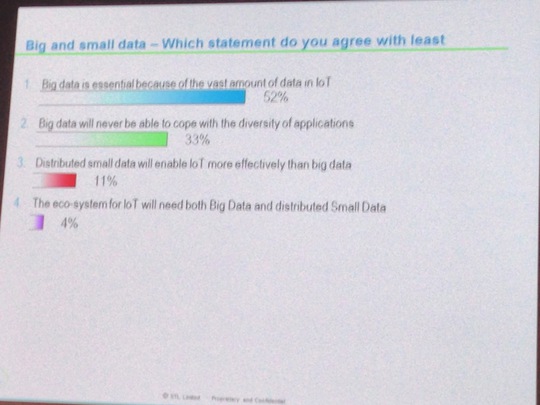