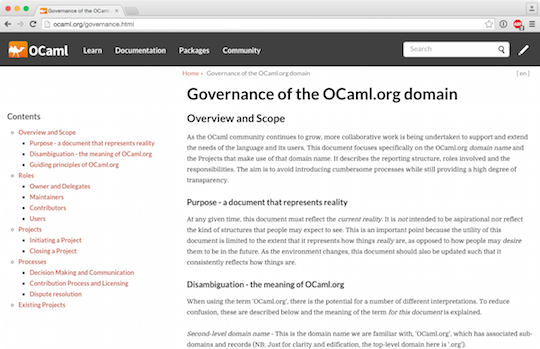 For several months, I’ve been working with the maintainers of OCaml.org projects to define and document the governance structure around the domain name. I wrote about this previously and I’m pleased to say that the work for this phase has concluded, with the document now live.

There were some recurring themes that cropped up during my email discussions with people and I thought it would be useful to present a summary of them, along with my thoughts. Broadly, the discussions revolved around the philosophy of the document, the extent of its scope, and the depth of coverage. This discourse was very important for refining and improving the document.

Some of the comments I received were essentially that the document did not represent how we should be organising ourselves. There was occasionally the sense (to me at least) that the only appropriate form of governance is a fully democratic and representational one.

That would entail things like official committees, ensuring that various communities/organisations were represented, and perhaps establishing some form of electoral processes. Overall, something relatively formal and quite carefully structured. Of course, instituting such an arrangement would necessarily require somewhat involved procedures, documentation, and systems — as well as the volunteer time to manage those processes.

These may be noble aims — and I expect one day we’ll be closer to such ideals — but one of the critical factors for the current approach was that we record how things are right now. In my experience, anything else is purely aspirational and therefore would have little bearing with how things currently function.

To put it another way, the current document must not describe the structure we desire to have, but the organisation we actually have — warts and all. Yes, right now we have a BDFL*, who personally owns the domain and therefore can do as he pleases with it. Irrespective of this, the community has been able to come together, coordinate themselves, and build very useful things around the domain name. This has happened independently of any formal community processes and, in my view, has largely been driven by people supporting each other’s works and generally trying to ‘do the right thing’.

Another aspect to point out is that is that such documents and procedures are not necessary for success. This is obvious when you consider how far the OCaml community has come in such a relatively short space of time. Given this, one might argue why we need any kind of written governance at all.

To answer that, I would say that once things grow beyond a certain scale, I believe it helps to gather the implicit behaviours and document them clearly. This allows us to be more systematic in our approach and also enables newcomers to understand how things work and become involved more quickly. In addition, having a clear record of how things operate in the present is an invaluable tool in helping to clarify what exactly we should work on changing for the future.

It’s a little confusing to consider that ‘OCaml.org’ is simultaneously a collection of websites, infrastructural components, and projects. Disambiguating these from the wider OCaml community was important, and relatively straightforward, but there were a few questions about the relationship between the domain name and the projects that use it.

Although the governance covers the OCaml.org domain name, it necessarily has an impact on the projects which make use of it. This matters because anything under the OCaml.org domain will, understandably, be taken as authoritative by users at large. In a way, OCaml.org becomes the sum of the projects under it, hence it’s necessary to have some lightweight stipulations about what is expected of those projects.

Projects themselves are free to organise as they wish (BDFL/Democracy/etc) but there are certain guiding principles for OCaml.org that those projects are expected to be compatible with (e.g. openness, community-related, comms, etc). These stipulations are already met by the current projects, so codifying them is intended to clarify expectations for new projects.

Another of the recurring points was how the current document didn’t capture every eventuality. Although I could have attempted this, the end result would have been a lengthy document, full of legalese, that I expect very few people would ever read. The document would also have needed to cover eventualities that have not occurred (yet) and/or may be very unlikely to occur.

Of course, this is not a legal document. No-one can be compelled to comply with it and there are very few sanctions for anyone who chooses not to comply. However, for those who’ve agreed to it, acceptance signals a clear intent to take part in a social contract with the others involved in work around the domain name.

Overall, I opted for a lightweight approach that would cover how we typically deal with issues and result in a more readable document. Areas that are ‘unchartered’ for us should be dealt with as they have been so far — through discussion and action — and can subsequently be incorporated when we have a better understanding of the issues and solutions.

The current version of the governance document is now live and it is very much intended to be a living document, representing where we are now. As the community continues to grow and evolve, we should revisit this to ensure it is accurate and is meeting our needs.

I look forward to seeing where the community takes it!

In case you’re interested, the set of links below covers the journey from beginning to end of this process.

* Yeah, I made sure to add Xavier to the BDFL list before publishing this. :)

Thanks to Ashish, Philippe and Anil for comments on an earlier draft.